You decided to adopt Bengal.

There is nothing more beautiful than the charming kitten of the Bengal breed. But to make a decision to bring a tiny kitten into the house is not from among the lungs. Unlike dogs, cubs should remain in their cat family - next to their mother, with their brothers and sisters - until he turns eight-ten weeks old.
There are several reasons why you should not separate the kitten from the family at such an early age. The bengal kittens needs to get used to the society, surrounded by his fellows, he goes through a certain period of socialization. Most of the actions, reactions to the surrounding world of a young animal depends on the lessons presented by the mother. She teaches her children to the toilet, stops them when they start playing too rough with each other, and gives them a strong sense of security. Problem cats, pugnacious and scratching, without toilet culture, are harmful, usually behave against their own nature, and this is the result that they were too early excommunicated from their mother.
As Bengal goes through several stages of formation, experienced breeders are eager to know how their kitten leads and develops elsewhere. Thus, they can understand how successfully and professionally they approach their business. However, it is the new permanent owner who lays in Bengal what he would like to see in his pet and pupil.
It is very wise to immunize a kitten, make the necessary vaccinations before releasing it into a new life, into a big world. Little Bengal do exactly the same vaccinations as usual kittens.
Bengals adapt well enough in a new environment thanks to their self-confidence, a trait they inherited from the wild world. Even podrashchennym they establish a very close relationship with new human friends. 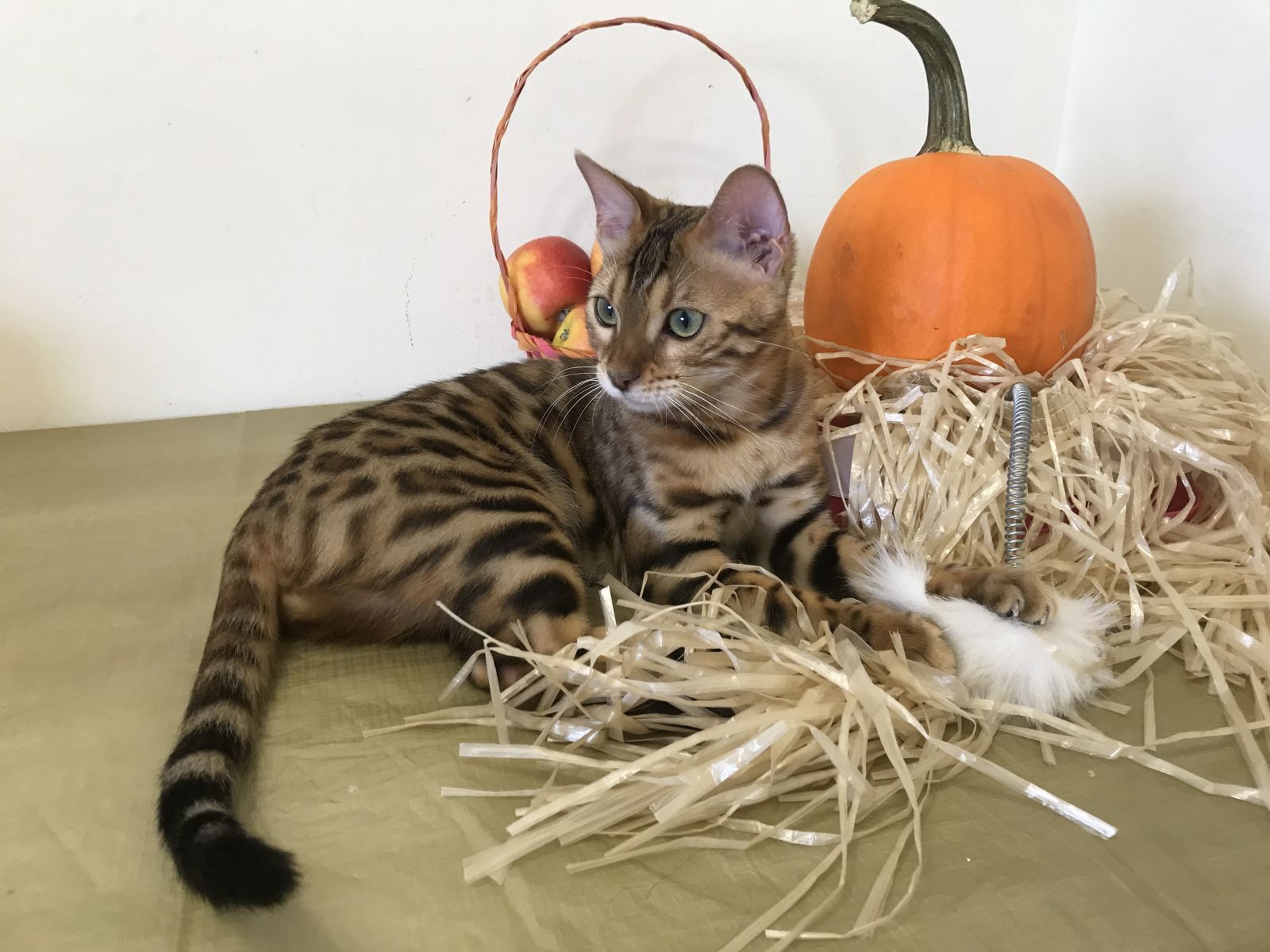 A little kitten requires a lot of attention, and little Bengal will not let you forget about it. They are extremely curious and entertaining - they have so many things to see and do, everywhere you need to climb, scramble and run. Dangers lie in wait at every corner: rocking chairs, open doors, small children, other animals, clothes dryers, poisonous plants, etc. Little Bengals need to run and play, hunt and sneak up. The game allows them to physically develop and build muscle. All this should be provided before you bring a new pet into the house.
Bengals  get on well with other animals in the house, especially if they have grown together. An adult Bengal can get used to a dog for a long time, especially if he has never seen one in his life. In general, if the animal inhabiting the house takes a friendly new stranger, then they will become good companions.
About the diet of Bengal queens. In the cinema, it is often shown how a small bowl of cold milk is poured in front of the cat, and the latter drinks with pleasure. However, in the real world giving the cat milk, you can bring her more harm than good. Although it may seem that for a cat to drink milk naturally, in fact it is not entirely true. The truth is that cow's milk does not have nutritional value for cats; moreover, many people can cause digestive problems. The reason is that most cats develop lactose intolerance soon after weaning from the mother. This means that they can not digest the sugars found in natural milk, which leads to digestive problems, in particular, to diarrhea. Some people think that cats need to give milk to get all the necessary nutrients. This is not true. In fact, cow's milk is not able to meet the nutritional needs of a cat. If the cat only fed on milk, it would not be able to survive. The proof is that wild cats do not need cow's milk to be healthy, and do not have the opportunity to drink it.
Lactobyfide for cats. Indications: To restore normal intestinal microflora; to increase the body's resistance; to improve digestive processes and digestion of feed.
There are a large number of vitamin manufacturers. You have the right to choose what is best for your pet. Our animals receive professional dry food, which contains all the necessary vitamins and minerals, thanks to which our pets are always healthy and full of energy.
By the time you bring a Bengal kitten to the house, you should have prepared the following:
Closed tray or tray with high sides, not allowing the filler to crumble. It is advisable to buy a tray from the calculation that the baby will eventually become 3-4 times larger. In a covered tray some cats do not like the dangling door and, perhaps you will have to remove it - keep this in mind.
Use for the tray is the filler, to which the kitten is used.

Wild Bengal cats are by their very nature single, but homemade can live in pride. For example, one cat and 2-3 cats. They can bring up their offspring together, but when they begin to grow up, the cat will see them as rivals and begin to assert their authority.
Due to the unpredictable nature of the Bengal fights are also special:
Cats of other breeds at the very beginning of the fight stand opposite each other, arching their backs, pressing their ears, threateningly shouting and waving their paws.
The Bengal stud first watches the rival, waits for the moment, and after waiting, attacks from behind and claws at the claws and teeth in the neck.
As many owners note, Bengals are reliable and balanced. If they see a stronger opponent next to each other, they will not join the fight or show aggression, but simply turn around and leave.
To Bengal cat has grown kind and obedient, it needs to be brought up from an early age. Many masters do not always pay enough attention to this, so in the future the animal grows, which does not differ in good manners, does not obey and allows itself much that can not be done.
The fundamentals of education should be laid gradually, step by step, not to allow the animal too much. For example, never indulge Bengal if it climbs on your shoulder, scratches or leaves clothes on tight. If you do not punish from such a child for such actions, the adult Bengal cat will not understand why she is being scolded, because earlier such behavior was not stopped.
And of course, be sure before buying a Bengal kitten, pay attention to the environment that was the previous owners, because the basics of behavior and the nature of the cat are laid from birth:
if the breeder treats animals with love, the Bengals will grow affectionate and obedient;
and if only money is important for him, then there is a risk of acquiring a Bengal kitten, which in time can turn into an aggressive uncontrollable being.
If you feel that you can not cope with your pet, then it's better to ask for help from specialists.We recommend that you contact to begal cattery Jungle Kitten.